Blog Should You Be Concerned About Fire Ants In Your Jacksonville Yard?

Should You Be Concerned About Fire Ants In Your Jacksonville Yard? 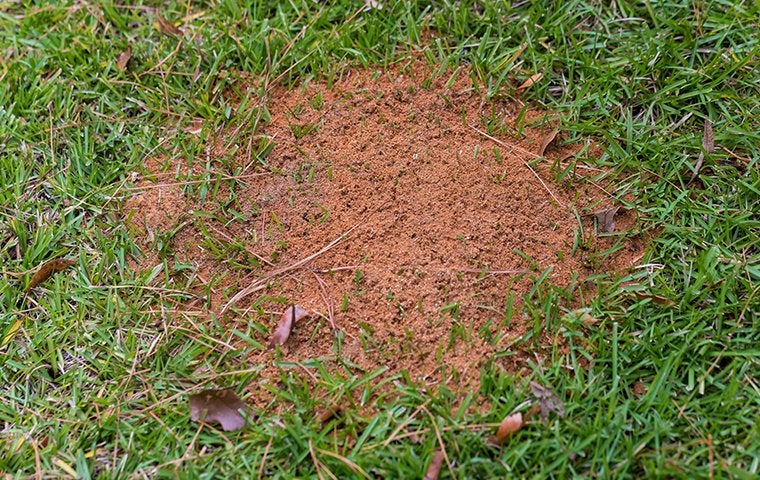 Many ants in Jacksonville can make their way onto your yard, but most of them are considered nuisance pests. Species like pavement ants might be invasive and annoying, but they aren’t harming you. However, there is one ant in the area that you do have to worry about when biting and stinging. The fire ant is a somewhat notorious species because of its painful bites and stings, and these ants in Jacksonville inject venom. This means that fire ants can sometimes be dangerous, so knowing how to protect against fire ants with Jacksonville pest control.

Fire ants are pretty easy to identify compared to other ants because of their coloration. They are a reddish-brown to reddish-black color. They are relatively small at around ⅜ inches of an inch long. Fire ants are usually found outdoors as they build their nests. Their nests will show up as a flattened mound, and they can be around two and four square feet.

Although fire ants usually live outdoors, they will sometimes stay indoors as the fire ant infestation spreads. And, they can still be a risk to have around as they could bite you while you are spending time outside or around your yard.

How Dangerous Are Fire Ant Bites?

While most ants aren’t very dangerous, fire ants pose some risks. When they sting, they inject venom. This usually leads to a burning and stinging sensation that is quite unpleasant. If you’ve ever experienced this, you likely remember the feeling quite vividly. This is why fire ant infestations are so hated compared to other ants.

The main reason fire ants sting is when they feel their nest has been threatened. If you disturb the nest, they will attack even if it’s entirely on accident. They often attack together in large numbers, so this is where the risk comes into play. The stings can turn into welts and pustules, and if you’re stung multiple times, there is a chance you could end up in the hospital. However, fire ant stings won’t lead to extremely severe health problems most of the time.

Is It Possible To Have An Allergic Reaction To Fire Ants?

The main reason you’ll end up with a more serious reaction to fire ant stings is that you are allergic. It’s possible to be allergic to the venom they have. If you are somewhat allergic, this could lead to hospitalization, especially if you are stung repeatedly. The difficulty is that most people don’t know if they are allergic until they’ve already been stung. This is why it’s essential to try and avoid fire ants and take steps to get fire ant control around your Jacksonville yard.

The best way to deal with fire ants is to contact the pest control pros at Trad’s Pest Control, but you can also take some steps on your own to keep these ants at bay. While fire ant control is best achieved through ongoing treatment plans, you can make your property less appealing to these ants by implementing these measures:

Find out more pest control services for fire ants and other ant species by calling Trad’s Pest Control today to get started.